Why the Star Trek-verse Still Matters 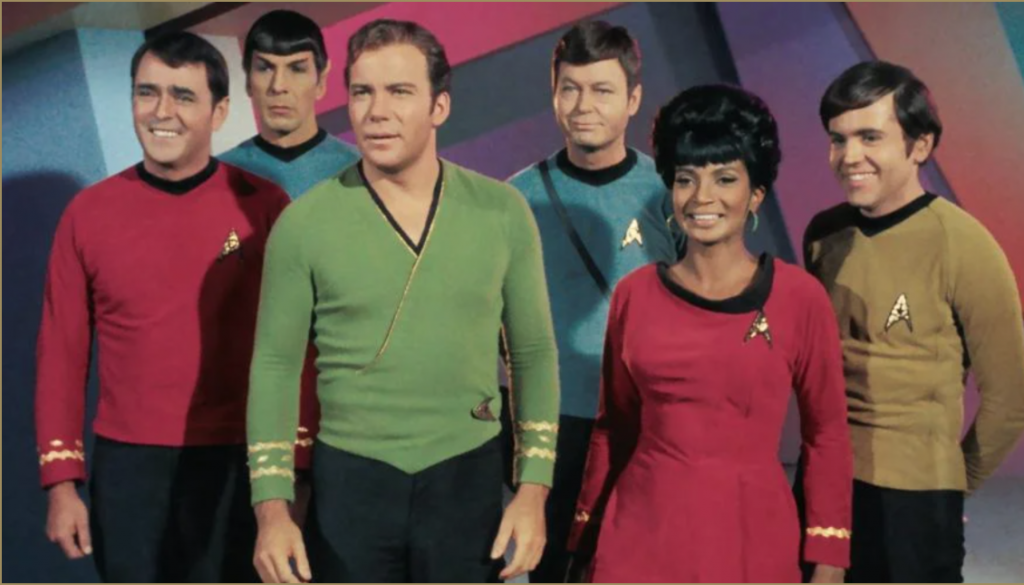 Why the Star Trek-verse Still Matters

Star Trek has been a force in pop culture for 56 years now, and, honestly, it’s a miracle that it survived this long to eventually thrive. It was well ahead of its time with its vision of diversity, peace, and love not only on Earth but far beyond. The original Star Trek wasn’t a ratings hit when it premiered in 1966, though it limped along for three seasons. And its loyal fanbase was often treated as a joke. But Star Trek has proven, in the decades since, to be visionary. It showed that sci-fi series can have serious implications. It proved that loyal fanbases are worth embracing. And it demonstrated that TV shows can make a real difference. Case in point, Nichelle Nichols, who portrayed Lieutenant Uhura on the original Star Trek: It’s hard to overstate Nichols’ influence. She was one of the first Black women featured prominently on a major television series, period. Her character was an officer. She and co-star William Shatner, who played Captain Kirk, shared a historic interracial kiss on the lips in a third-season episode (see below). She was so significant that she was talked into sticking with the role by none other than Martin Luther King Jr. And she went on to recruit women and people of color for NASA for nearly 40 years, inspiring and championing the careers of the first American woman in space, Sally Ride; the first African-American in space, Guion Bluford Jr.; and the first African-American woman in space, Mae Jemison. Accordingly, her ashes will be released into space later this year to honor her July 30 death. Peabody has recognized the Star Trek franchise’s vision for some time. In 1987, we paid tribute to the excellent syndicated series Star Trek: The Next Generation. “Star Trek has been part of the American television fabric for more than two decades,” the citation read. “An attempt to make Star Trek: The Next Generation live up to the considerable reputation of the original was complicated by the fact that it would appear, not on the networks, but in first-run syndication. Rather than give in to the usual realities of ‘first-run’ and produce a low budget, but profitable program, the producers chose instead to opt for the highest quality in writing, decor, acting, and, indeed, all facets of the production.” The more recent series Star Trek: Discovery was nominated for a Peabody as well in 2017. Star Trek: The Next Generation was ahead of its time in ways we couldn’t have fathomed then. Syndicated series aren’t the future now, but the endless offerings of streaming services, with their any time/anywhere delivery and their niche attention, fit a similar bill. You can watch any Star Trek you want whenever you want on Paramount+. There’s Star Trek: Lower Decks, Star Trek: Discovery, Star Trek: Picard, Star Trek: Prodigy, and Star Trek: Strange New Worlds, in addition to the previous series and movies. As Paramount+ celebrates the franchise’s legacy with Star Trek Day this week and the space community recognizes Nichols’ impressive influence, here are a few ways to explore the ever-expanding Star Trek-verse.

A Historic Moment From the Original ‘Star Trek’

Nichols and Shatner kiss in the 1968 episode “Plato’s Stepchildren,” a watershed moment for interracial relationships on television (and part of a particularly weird plot in which the crew lands on a planet full of sadistic “Platonians” with telekinetic powers).

Worried that the kiss would anger stations in the Deep South, Nichols explains that NBC executives asked to film two versions of the scene: one with the kiss and one without.   In this interview, Nichols tells the story of what Shatner did in order to force the network to use the kiss. 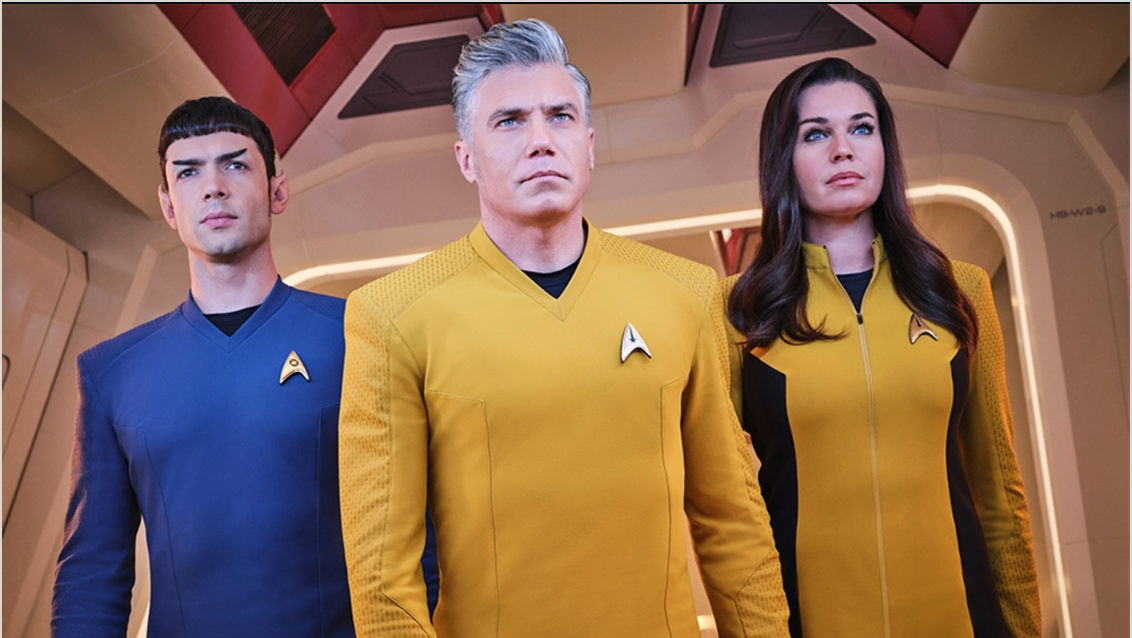 The recent addition to the Star Trek franchise follows the crew of the USS Enterpriseunder the command of Captain Pike, Kirk’s predecessor. The Hollywood Reporter‘s Daniel Fienberg writes that “after a string of spinoffs characterized by gritty darkness or twisty mythologizing, Paramount+ may have cracked the Star Trek code with a new series that’s bright, optimistic and fundamentally episodic in nature.” 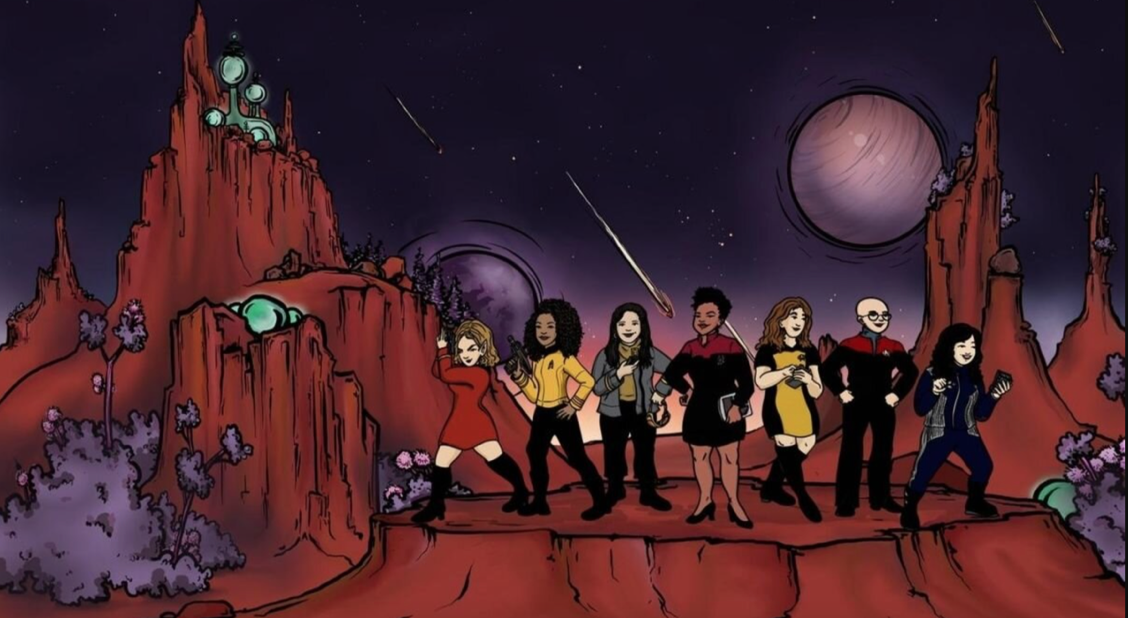 A rotating crew of seven hosts dissects everything Trek from an intersectional feminist perspective. Recent episodes include an analysis of fatherhood on Voyager, a discussion of women’s evolution in Star Trek, and an interview with the costume designer on Strange New Worlds.

Further Reading: ‘Phasers on Stun!: How the Making (and Remaking) of Star Trek Changed the World

Journalist Ryan Britt chronicles the entire Star Trekuniverse, from its origins as a fledgling TV show in the 1960s to its cult hit status and stunning expansion in the five decades since. Through research and inside access, Britt shows how Trek‘s original vision remains intact, and more relevant than ever, even as the series is constantly reimagined through films, animation, TV series, and more. Britt shows how this campy, inexpensive sci-fi show eventually took over the world and drove culture, pioneering diverse representation and LGBTQ+ portrayals while affecting real change in the U.S. space program.