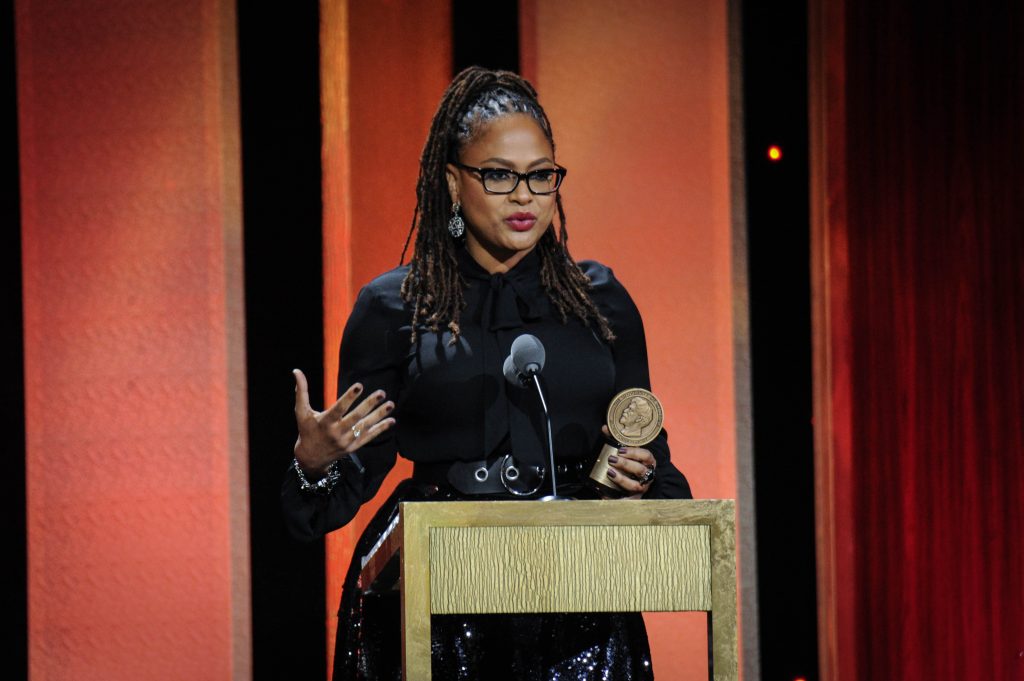 Ten years ago, shows like Game of Thrones, Homeland, Parks and Recreation, Veep, and Breaking Bad dominated the television conversation—most of them cable productions, with the occasional network series still making a splash. It seemed unfathomable that streaming services would gather enough steam to produce a mass hit, or even a conversation-starter. But by the mid-2010s, streaming was radically changing viewing habits, ushering in an era of binge-watching and Peak TV. The sheer tonnage of choice felt overwhelming, but it had one major salutary effect: a level of diversity we’ve never seen before in TV history, with more women and people of color represented both on screen and behind the camera on streaming and cable alike, with series like Jessica Jones, Master of None, Atlanta, Better Things, and Insecure. Ava DuVernay was made for this moment. She’s a Black woman with a passion for social justice whose voice is desperately needed at this time. She slips easily from major films to documentaries to TV drama. Her eye for big-screen framing makes a small-screen documentary series like 13th, about racial justice and mass incarceration, more engaging for a wide audience; her knack for storytelling brings the harrowing tale of the Central Park Five to life in a dramatic series like When They See Us. It’s for all of these reasons that Peabody has recognized not only those two works (and Colin in Black and White with a nomination this year), but also DuVernay’s production company, ARRAY, with an Institutional Peabody Award. One of ARRAY’s creative achievements is the seven-season run of the family drama Queen Sugar on Oprah Winfrey’s OWN network, which tells the story of adult siblings dealing with the family sugarcane farm in the aftermath of their father’s death. With its final season airing now, it’s one of the longest-running Black family dramas in TV history—not to mention one of the few, period. It’s also wrapping up its run with all 88 episodes directed by women. In this exclusive Peabody Creators interview, we talked with DuVernay about the power of Peak TV, why we need more Black family dramas, and how far Hollywood has—and hasn’t—come with female directors.

Peabody: Queen Sugar was your first TV production. Why did you envision this as a television series? Has it gone the way you expected? AD: It’s an epic family story that had to be told over many episodes and seasons. We’re going into our seventh season now, so it has far exceeded my expectations. And because it was my first TV production, I was just learning the different processes and lingo. At first I was just trying to get through the first episode or the first season. Now I just want to give it the kind of ending it deserves.

As someone who has worked in TV and film, what do you think TV’s place is in our culture?  AD: I’m lucky to be working at the peak of television’s powers, when we can work in many different genres. There’s so much we can do now. And I’m really privileged to be able to work in different formats and choose the best one for the story I want to tell, whether it’s a documentary or a dramatic series or a film.

Your shows reflect some of the most crucial debates of our era, whether or not they take place in current times. What kind of shows might you have made in a different era?  AD: I can’t imagine it because I wouldn’t have the choice. Your imagination couldn’t go wherever it wanted to go because there were limits on what could be done.

Peabody: Queen Sugar is one of the longest running Black family dramas in TV history. What was the key to its success? AD: The key was being on a network owned by a Black woman who understood the importance of this kind of story and the way we were telling it. And it got the support and promotion that it needed to last seven seasons, which it wouldn’t have gotten somewhere else. It wouldn’t have a chance.

Peabody: You’ve done other work like 13th and When They See Us, which are clearly important and either nonfiction or based on a real story. Why do you think it’s also important to reflect Black life in this other format, the family drama, which really has been particularly devoid of people of color, besides, say, Empire? AD: When you think of family dramas on TV, you think of The Sopranos, Six Feet Under, Friday Night Lights … it’s very hard to think of a brown family or a Black family. There’s more of a history of Black comedies, but not dramas. Family is sacred, and family on television has almost always been white. This is one of the last spaces where it’s still very segregated. It’s crucial that we see more Black families depicted this way on television.

Peabody: You hired only women to direct all 88 episodes. What impact do you think this had on the series and in the industry? AD: The series just ended up with 88 well-directed episodes. But the impact on the industry is what I was really hoping for, and is what I’m most proud of. Now you can’thave a show with all male directors. People will start asking questions. But that wasn’t true when we started. There were a lot of questions about making the commitment upfront to this. Now that we’ve done it, that old excuse that they just can’t find women directors won’t work now. I found 42 women directors. Having all male directors now is a choice. And, yes, I’m looking at you, Game of Thrones: House of the Dragon.

Peabody: Colin in Black and White—your show about activist and NFL quarterback Colin Kaepernick’s childhood—has such a unique approach, with Kaepernick showing up on screen to explain the parts of his life being dramatized. How did you decide to format the show that way? AD: We tried that stew of approaches, and it really worked. We wanted to use everything we had—clips, Colin himself, and the dramatizations. It’s kind of a … docu-dramedy? I think that’s the best way to describe it. We thought it was the most effective and engaging way to tell the story.

Peabody: What are you into right now? What are you watching that you think is great? AD: I’m watching a lot of older stuff for inspiration because I’m deep into my next film, an adaptation of Isabel Wilkerson’s Caste. Like Schindler’s List, which is very good, but you probably don’t need me to tell you that.

Peabody: What did winning a Peabody mean to you? AD: I’ve said this before on the record, but winning a Peabody means a lot because of the process. You can’t campaign for a Peabody. You can’t take out ads or get dressed up and go to cocktail parties to get a Peabody. There’s care put into the morals of the piece, and how it’s made and by whom. It’s not the piece with the biggest star, or the most popular piece. That’s why it’s so meaningful.

A Moment From ‘Queen Sugar’

The trailer for the seventh and final season of ‘Queen Sugar,’ airing now.

This clip from DuVernay’s Peabody-winning documentary series 13th shows how Civil Rights activists in the 1950s and ’60s used the media to spread the message about devastating racial injustices such as Emmett Till’s brutal death.

“Since before I ever met you, you shared kindness with me,” she said. “Thank you for seeing me and my dreams before I could see them myself.”