Peabody Finds: When Late Night Dares to Get Political 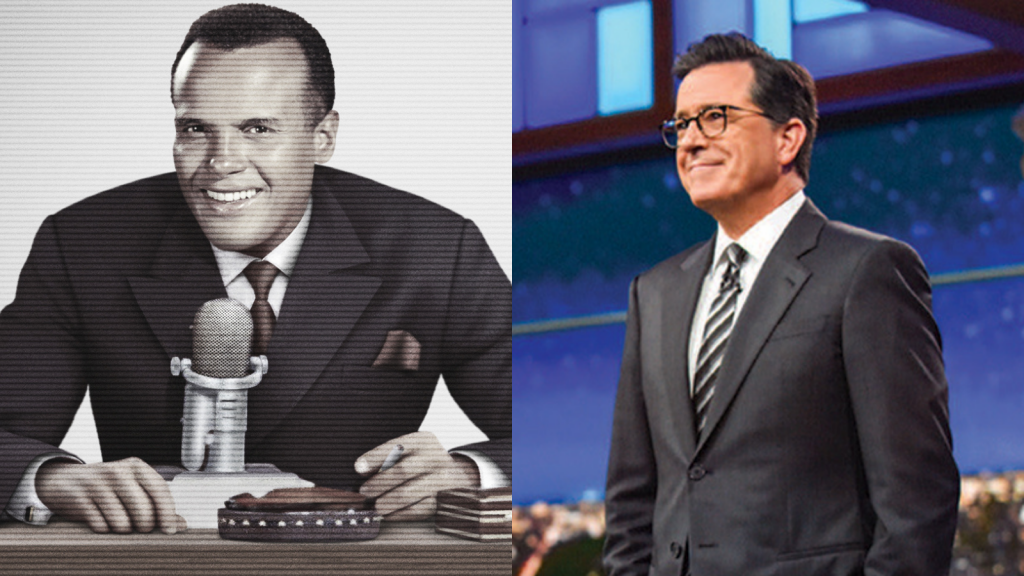 Entertainment television was once highly allergic to politics. Not only was it rare to find political comedy in entertainment programming on the airwaves, but it could get you canceled (as CBS did with The Smothers Brothers Comedy Hour in 1969). While Norman Lear radically changed what networks would stomach when it came to discussions of social issues in entertainment, late-night talk shows generally played it safe in their jokes about current events and politicians. Politics was seen as unnecessarily divisive. And in an economic model where broadcast networks were in the business of delivering eyeballs to advertisers, producers felt it best not to make those eyeballs red with rage over politics.

Yet as the documentary The Sit-In: Harry Belafonte Hosts The Tonight Show demonstrates, there was one extraordinary week in TV history that defied this apolitical approach. In February, 1968, Johnny Carson, who typically eschewed politics, turned a whole week of programming over to singer, actor, and political activist Harry Belafonte as guest host.  Again, the year was 1968. Belafonte was deeply involved in the Civil Rights Movement and was very vocal in connecting his art to politics. Carson may have been uncomfortable being political himself, but it is hard to imagine his selection of Belafonte wasn’t driven by a desire for someone else—a Black man, in particular—to engage the issues of the day.

And Belafonte did not disappoint. Guests for that week’s shows included standard entertainers and musicians such as Aretha Franklin, Dionne Warwick, Lena Horne, Sidney Poitier, Nipsy Russell, and Bill Cosby. Fifteen of the twenty-five guests were African American. But the guests also most famously included Martin Luther King discussing how legal gains in Civil Rights had not substantially improved the economic conditions of the poor (his Poor People’s Campaign), and Robert Kennedy discussing America’s sanctimonious hypocrisy over issues of equality, government regulation, poverty, and the power of the wealthy.. Both men would be assassinated only a few months later.

In signing off that week, Belafonte recalls telling the audience: “I am fully aware of how many of you have been offended by the politics aired on this show this week. None of it was meant to offend. But all of this was consciously arranged by me to give you all a taste of what’s being said in rooms that many of you may not know or enter. Thank you for listening.”

The Sit-In captures an extraordinary moment in American television history. But it also makes one ponder what television entertainment talk could have been all along, especially since that time. Why segregate discussions of political issues from popular television talk? What is more, why bring a black man on to lead the discussion, knowing it would be easy to dismiss such conversations or heavy representation of African American voices as not belonging to the “American mainstream”? Why couldn’t Carson or Leno or Letterman do it themselves? And perhaps most importantly, why is there still no person of color sitting in a network late-night talk chair, all these years later, and what are we missing as a result? As Belafonte himself notes, television has a particular power and privilege to offer many Americans something they don’t typically see or hear, especially from minorities with whom they may not regularly engage. Which is to say, entertainment talk shows can offer American democracy something richer than they typically do when seen through this lens.

Jump forward half a century, as The Late Show with Stephen Colbert places a very different mark on late-night television’s approach to politics. When Colbert migrated from his political parody on The Colbert Report to the chair of a broadcast network talk show in 2015, he was determined to shed his former persona and demonstrate the “real” Stephen Colbert. His approach was to adopt the standard late-night host persona squarely in the mold of all the white-bread hosts that had come before him—good natured and afable, but squarely apolitical. It also earned him a last place ranking with viewers.

Enter President Donald Trump. Colbert treated GOP candidate Trump like all the other late-night hosts—as a bemusement, a long-shot, a walking/talking joke personified.  That is, until Trump was elected to the most powerful office in the land. At that point, Colbert turned to direct and aggressive ridiculing and harsh (yet still humorous) barbs thrown at the president. Colbert is, as is widely known, a devout liberal Catholic and former Sunday School teacher. This move toward  “politicization” (if you will) helped Colbert craft what seems to be his authentic persona, allowing him to speak his own truth to power outside the confines of a comedian’s caricature.

Whether audiences find such overt political humor comforting or disturbing is perhaps, like most everything else these days, dependent on one’s own ideological leanings. What is inarguable, though, is that Colbert has transformed the network late-night talk show form into something very different from what dominated the genre previously.  And his outrage over Trump’s handling of the global coronavirus pandemic demonstrated that “politics” in entertainment television may be less about partisan alignments and more about righteous indignation over politicians who put themselves and political power above the public good.