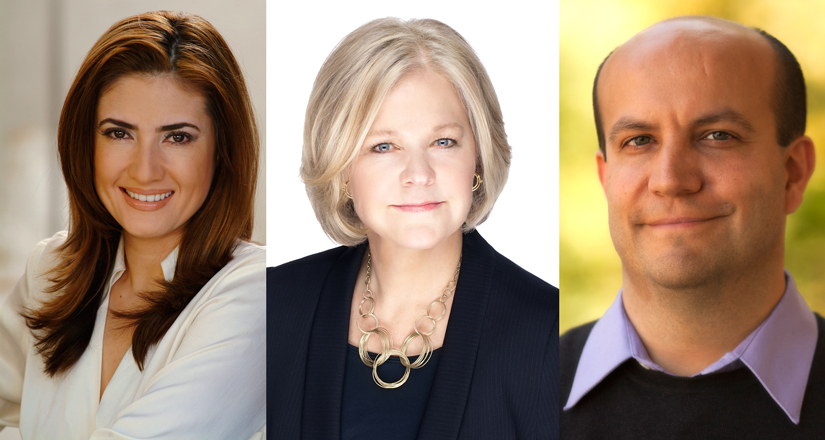 The University of Georgia has approved three new members of the George Foster Peabody Awards Board. Joining other distinguished experts who select electronic media’s most coveted prize are Martha Nelson of New York, Naibe Reynoso of Los Angeles and Jonathan Gray of Madison, Wisconsin.

“Judging the great variety of electronic media materials that we receive is no easy task,” said Jeffrey P. Jones, director of the Peabody Awards. “These three individuals bring tremendous experience in and knowledge of media across platforms, genres and formats. They will contribute immensely to our efforts to locate and recognize excellence in all of its forms.”

In April, Nelson, Reynoso and Gray will join Jones, board chair Thomas Mattia and the other veteran board members in Athens to choose the recipients of the 74th annual Peabody Awards from an international field of more than 1,000 entries from broadcast and cable television, radio and the Internet. The 2014 recipients will be announced in mid-April.

Jonathan Gray is a professor of media and cultural studies at the University of Wisconsin, Madison. A prolific writer, he is the author and editor of nine books. His monographs include Show Sold Separately: Promos, Spoilers, and Other Media Paratexts (NYU Press), Television Entertainment (Routledge) and Watching with The Simpsons: Television, Parody, and Intertextuality (Routledge). His edited collections include Fandom: Identities and Communities in a Mediated World (second edition forthcoming, NYU Press) and Satire TV: Politics and Comedy in the Post-Network Era (NYU Press). Gray was co-editor of Popular Communication: The International Journal of Media and Culture from 2007 to 2012. He is the founder and senior editor of Antenna, a five-year-old, large-group blog in media and cultural studies that originates in Madison. Gray has delivered more than two dozen talks and keynote addresses, including presentations at Harvard University, Université Sorbonne Nouvelle, Paris, University of Bologna, Italy, and Zhejiang University, China. He holds a Ph.D. from Goldsmiths College, University of London. He grew up in Toronto, London, Perth (Australia), Singapore, Hong Kong and Vancouver (British Columbia) before coming to the U.S.

Martha Nelson capped a 20-year career at Time Inc. as its editor-in-chief, the first woman in the company’s 90-year history to hold the title. She is the founding editor of InStyle magazine, with duties also including overseeing the production of several InStyle TV specials and the launch of InStyle.com. She went on to be the editor of People magazine, guiding the re-launch People.com to become the No. 1 entertainment magazine website. Nelson’s illustrious career also includes stints as managing editor of Signs: Journal of Women in Culture & Society, staff editor at Ms. Magazine, and editor-in-chief of Savvy magazine and Women’s Sports & Fitness. She currently she serves on the advisory board of the Glass House and as a trustee of the National Trust for Historic Preservation and of the Actors Fund. Nelson received her bachelor’s degree from Barnard College and resides in New York City.

Naibe Reynoso is an Emmy- and AP Award-winning journalist, host and media producer whose work spans television, radio and on-line news platforms. As a television journalist and producer, she has worked in the Denver, Phoenix and Los Angeles television markets. She has served as a news, entertainment and lifestyle reporter for Univision, Reelz Channel, CNN Espa√±ol and Fox News Latino. Reynoso is also co-host of HOLA! LA, a morning talk television program on KCAL/KCBS in Los Angeles. Earlier in her career, Reynoso was co-host and news anchor for Radiovisa, the Spanish-language talk-radio network. She also hosted and produced the children’s education TV show, Chiquitran, for KWHY-TV in Los Angeles, and won a regional Emmy for her work on Mas Exitos in Phoenix. Reynoso currently works as host and producer for Ora TV, Larry King’s on-demand digital television network. Reynoso also teaches media and journalism classes at UCLA extension. She is a graduate of UCLA and hails from Los Angeles, where she still resides.

Full biographies of all the Peabody board members are available upon request.