After just three short seasons on the air and in the midst of an increasingly competitive field, Inside Amy Schumer has secured a place as one of the consistent producers of “water cooler moments.”

Granted, the phrase is a bit dated. Perhaps it’s more accurate to call it one of the most “shared shows on Facebook timelines.”

Regardless of how people actually view it, Amy Schumer’s comedy series has managed to produce unifying TV moments when it seems as though the audience couldn’st be any more fragmented.

The current Amy Schumer moment reminds me of the Dave Chappelle phenomenon. The main difference between the two was that Chapelle’s Show was actually watched on television sets by everyone at the same time. It’s remarkable that Schumer has built up a similar momentum when our collective attention towards TV is spread thinner that it has ever been.

Schumer’s unique brand of feminist comedy is as singular, bold and badly needed today as Dave Chapelle’s commentary on race was a decade ago or Richard Pryor’s three decades before that.

But according to Schumer, making feminist statements was not necessarily the plan. “I think we set out to be funny, but inherently other stuff just comes out because that’s what we’re thinking about. Those are the people that we are. We’re all feminists. We all like justice, and we’re all pissed that things aren’st the way they should be or could be. So I think that just comes out.” 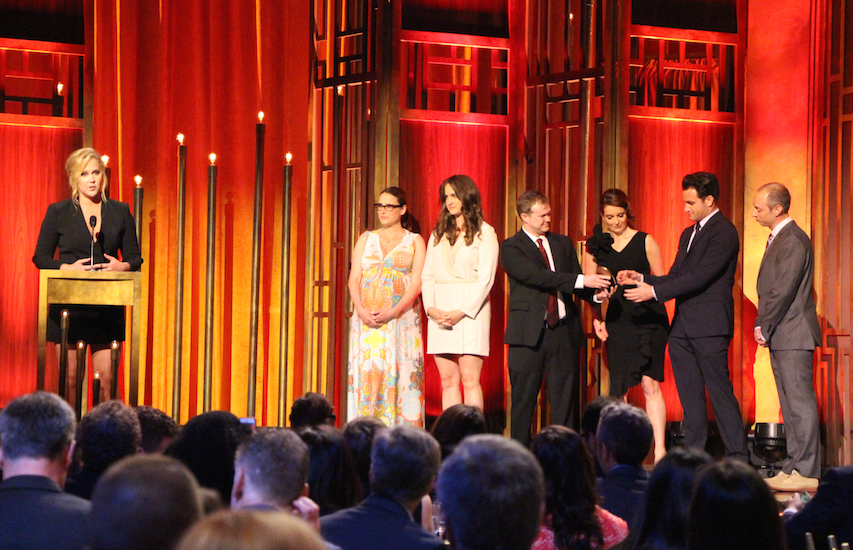 The show makes its comedic arguments so soundly and clearly that a skit that challenges our culture in ways that seem impossible for us to accept one day somehow manages to go viral the next. In the masterful hands of Schumer and company, yesterday’s radical feminism becomes today’s hilarious common sense.

“We’re all children,” Schumer said at the Peabody Awards ceremony. “We don’t want to be yelled at or given information like it’s school. Comedy’s a great way to make it more palatable and kind of trick people into listening because they’re laughing. Sometimes they don’st realize that anything sunk in until the next day, we hope.” She paused slyly for effect. “Or right away, if it’s the AV Club.”

The show is fearless in tackling issues as difficult as the culture of rape in the military, our sexist attitudes towards actresses as they age and even the viewers’ perceptions of her body. Before we’ve finished laughing, we realize she’s changed the way we’re talking about these issues.

When presenting Schumer with her Peabody at the ceremony this year, Tina Fey cited the show’s skit about rape in the military as a particularly strong example of Schumer’s comic brilliance, exemplifying her ability to address a subject as difficult as rape in a way that is “inarguably funny.”

When asked about that sketch at the ceremony, Schumer cited the 2013 Peabody-winning documentary, The Invisible War, as the direct inspiration for the piece. “I think it’s about information that not a lot of people have,” she said. “None of my group of friends have gone to war or been a soldier.” In the sketch, Schumer is playing a combat video game in which her avatar, a female soldier, is raped, discouraged from pressing charges by superiors, and then buried under paperwork when she does.

“We thought we would get a lot of s— for that scene actually, and we didn’t.” In fact, the opposite happened and the sketch went viral, helping to make Schumer’s videos a constant presence on social media.

As Fey pointed out from the stage, Inside Amy Schumer overcame the additional hurdle of diverging from Comedy Central’s typical brand of comedy, which Fey jokingly referred to as “a network that for years was tonally the equivalent of a 12-year-old boy’s sock drawer.”

But even on a network with a demographic that skews towards males, the show’s co-creator and executive producer, Daniel Powell, said that it doesn’t seem to matter as long as it’s funny. “We feel like we’re well established on the network, and if we’re funny, they’sre going to watch,” Powell said.

And people certainly are watching, and talking about, Amy Schumer, including the Peabody Board of Jurors. She said she was very proud to be recognized by the Peabody board and the University of Georgia.

“This is the one you can really rub in people’s faces,” Schumer joked as she held her Peabody Award. Shortly after saying that, she looked down at the silhouette of George Foster Peabody on the medallion, “He looks like Zach Galifianakis.”